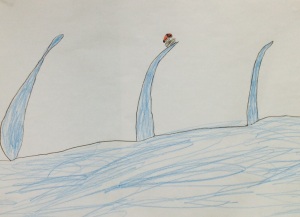 Artwork inspired by my story The Bug and the Rock

Last week I visited my eldest son’s class to read a story I’d recently written, The Bug and the Rock. I wasn’t sure how they would like it as it is a simple story and isn’t yet illustrated (apart from my terrible pencil sketches).

I needn’t have been concerned. The class of five and six-year-olds sat very quietly listening to the whole story, which uses repetition and rhythm to carry the narrative, and then showed they had followed it by asking some questions.

‘How did you write the story?’

‘How did you make the book?’ (I took in a dummy that I’d folded into a book shape)

‘Why did the rock float?’ – this was a good question and one we came back to later

After a short time talking about it, all the kids without exception drew a picture of something to do with the story. Lots drew bugs and rocks and trees but others took a different approach and drew their own story. 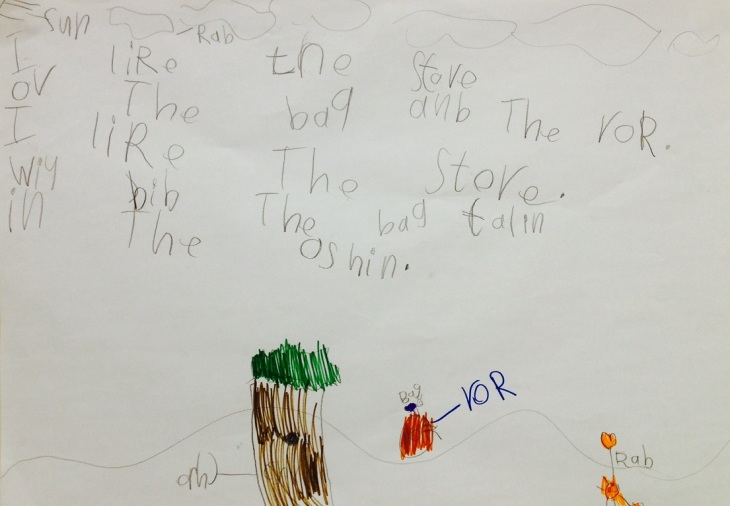 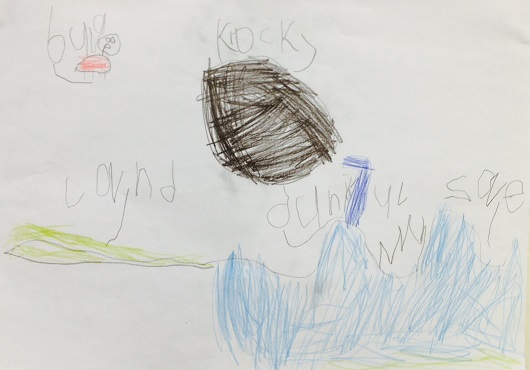 My son attempted to draw, and write the a label for, the barnacle in his picture. It’s the blue thing in the middle.

I was curious to see that the bug, crab, rock and tree all seemed pretty easy to draw but not many attempted the featherstar and the barnacle. Without pictures they were forced to remember what these things were, or imagine what they could look like. 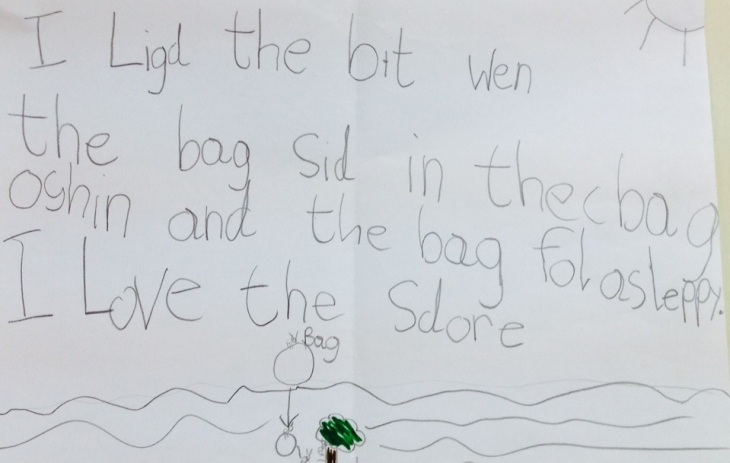 ‘I liked the bit when the bug sat in the .. ocean and the bug fell asleep. I love the story’

The teacher was particularly pleased that most of the kids wrote something as well, without being asked to do any writing. Some even wrote their own stories in the short time they had. 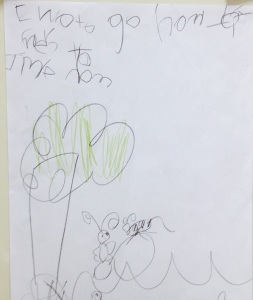 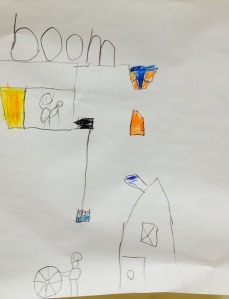 I liked this boy’s alternative explanation for the BOOM at the beginning of the story. In his version, the noise is made by bricks falling on a house.

After about 10 minutes, they regrouped and shared their pictures in small groups. We then moved onto the experiment part of the session.

Because the rock in the story was pumice that floated on the sea, I brought in some pumice that I had bought in a spa shop for $1 from which I managed to remove the plastic nail brush. I also collected three different stones from my garden and showed them all to the group.

With a tank of water in the middle of the circle, everyone made a prediction about what rocks would and wouldn’t float. Of course, only one did and then I explained how pumice comes from volcanos and that the BOOM in the start of the story was from a volcano erupting. I also talked about Krakatau which was very active while we lived in Jakarta and spread quite a lot of pumice in the sea in 2009.

I love bringing a practical element into my writing and I was so pleased the kids were so engaged in the experiment. Not to mention, quite relieved that they liked the story!