How exactly does your child teach themselves Indonesian? Well, ideally they’re living in Indonesia and speaking and listening to Indonesian every day. But what if your child doesn’t seem interested in using Indonesian? My now six-year-old son just didn’t want to practice any Indonesian when we first came to live in Bali. Bit by bit he has become interested in learning words and started to enjoy surprising people by using Indonesian unexpectedly. Some of these resources have also helped.

Another activity I love seeing my son involved in is anything he can do by himself (screens aside). We have countless activity books in our house – mazes, dot-to-dots, colour by numbers, colour by stickers, sticker books. You name it we probably have it.

Spanish Club by Rush Sharp and Rosi McNab, published by Collins, 2009. Perfect for starting kids as young as five or six learning Spanish.

But where are the activity books for learning Indonesian? We have a fantastic one for Spanish called Spanish Club that regularly gets pulled out and a little bit more gets filled in each time. Most of it gets done without involvement from me and the stickers have been great at giving him confidence with reading before moving on to writing.

If only there was an Indonesian Club!

Here are a few interactive resources we’ve tried out:

Flash cards don’t sound particularly exciting but my son loves them. He spreads them out and puts each one on top of its picture on the wall chart (he spreads it out on the floor). There are 64 cards, each one with a picture and printed on strong glossy card. They are very basic words and we found that both our children already knew most of them: colours, numbers especially.

He likes them so much I had to buy him the second set which he now plays with as well. He recently quizzed my mother on all 128 words – she did okay. Some of the more advanced words are verbs like melihat, pergi and tutup. It’s a very useful selection of words.

Each set of flash cards is accompanied by a CD which we haven’t used much though some of the songs are good. Before the songs come on, though, there are pronunciation exercises which are not very interesting.

Each set also has a learning guide which has the potential to be a very useful resource. Unfortunately, the format lets it down. It has been printed cheaply in black and white with few images, and in a small size to fit in the box. There are some fun games described but no room for interactive activities. Published in 2009, they are aimed at ages 4–12 and beyond. This has been the best investment I’ve made into Indonesian resources for the children.

My Indonesia-English E-Book made by Earnest Creation Co.

So, it looks bright and colourful but it is mostly useless. However, I bought this from Hardy’s Supermarket with only a faint hope it might prove useful. It is mostly in English but with many simple words in Indonesian. There are also recordings and a choice between Indonesian or English language but it is not especially easy to use.

When I asked my son what words he learnt from it, he said ‘biola’. Yep, not exactly high-frequency words. More like: let’s recycle the pictures for the English words and move them around a bit.

Look at the World: Sea – Lihat Sekelilingmu: Laut, text by Anna Casalis and translated into Indonesian by Gramedia

Surprisingly, this has been a big hit in my house. My youngest son regularly chooses it as his bedtime story. As it’s a lift-the-flap encyclopaedia-type book, there is not much story, but there is plenty of scope to read the Indonesian as well as the English words for each item in this book and quiz the kids on all the different words. 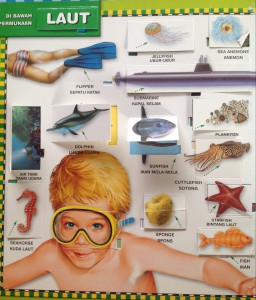 I don’t usually read out what is written under the flaps but it’s good practice for me as well, as the explanations are all in Indonesian and use a lot of vocabulary I’m not familiar with.

This is another one I bought at Gramedia and I was excited to find it  (though I still didn’t get my hopes up). My kids love sticker books and I hadn’t seen a single other sticker book for Indonesian. It is all about learning vocab which isn’t a bad thing. There are 360 stickers and each one has to be matched with a word with the colour giving it a clue. The word is written in English, Indonesian and Mandarin. 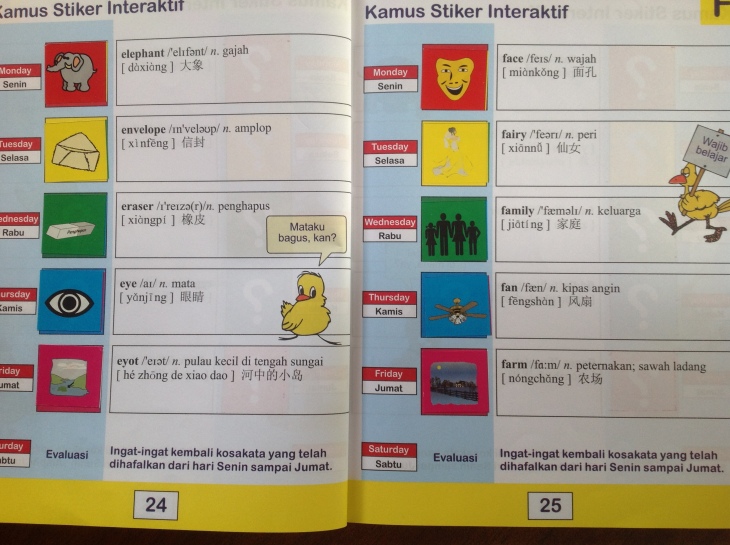 The words are in alphabetical order (by English unfortunately) and despite it being repetitive, my son was charging along with this book and maybe even learning a few words along the way. He got up to the letter P, and then the colour of the stickers stopped matching the spot on which to put them and it was all over. He abandoned it and hasn’t looked at it since. Sigh.

The Big Bali Book: Activities for all the family by Tara and Shaan Peckham, 2011

This has a lot of activities in here but not many are suitable for the 4-6 age group. They are mostly letter and word games interspersed with information about Balinese culture, history and geography.

If it had been available I would have bought Workbook 1 but I could only find this one. But judging from this workbook it probably wouldn’t have been very interesting for younger children either.

I’ve recently heard of a new book called My Awesome Bali Adventure: A travel journal for kids so look out for a review when I get my hands on a copy.